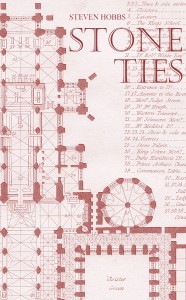 In the ancient city of Worcester, Simeon Ireson strives to reveal the identity of an 18th century sculptor, the man he knows only as the Northern Master. When he discovers a cryptic mason’s mark engraved on the cathedral memorial, it opens a fateful door; a door to discovery and understanding; a door to an unexpected relationship; a door to another time.

In his search to understand its meaning he begins to understand the consequences of love and attraction, betrayal and loss. But as his love for one woman grows, so the demands of another threaten to change his world. As one hides her enigmatic secret, so another asserts her unwelcome claim. As love and passion, pride and tradition collide across time, only one certainty remains; his life can never be the same.

“A Perfect Blend of History, Mystery, and Romance – Truly Engrossing”

I first developed my thoughts around Stone Ties in the winter of 2009. One day six words planted themselves in my mind, unannounced, one of those strange bathroom moments.

This dislocated phrase compelled me to find out, and so the story was born. An old hag stone in my pocket, picked up from a Suffolk beach long ago, helped me on my way.

Here is the Prologue as a taster….

The iron latch sprang open, and the door swung open. Although still dark he knew his way. He knew this church well, every stone flag, every box pew. No stumbling, no searching outstretched hand, but the certainty of the familiar, a determined progression to his intended place. His footsteps echoed slightly as he approached the pew. It opened to him as he pushed the wooden door gently, a faint creak betraying his entrance. It was barely possible to make out the burnished red-gold of the number 16 painted on the door, but he knew it was there.

Hardly able to stand he looked around him. Familiar shapes, scarcely suggested, reassured him and validated his presence. As he surveyed the barrel-vaulted ceiling, barely perceptible through the gloom, the space seemed to reel, his breathing quickened, and he hit his knee hard on the wooden kneeler as he slumped to the floor.

He knew it was there at the end of the pew, close to the wall, and he crawled along the wooden channel feeling all the time for the signature chill and smoothness of the stone. His left hand open, the right tightly clenched around its precious totem, his knuckles scraping on the unforgiving slabs.

Now fully outstretched, he lay exhausted, unable to move any further. His face pressed against the smooth cold slab. His breath pulsed, forming a frosted veil over the polished surface; a bloom that encroached like some vaporous lichen upon the stone, reached its limit, and spread no more.

What inscription on the slab that remained un-obscured by his head seemed to emanate from his parted lips. His finger listlessly traced the beauty of an incised line.

“What’s your purpose?” A barely perceptible whisper was all he could muster.

There, within the tomb-like enclosure of the box pew, he lay under the towering presence of the three-decker pulpit. His only witness the Pelican in her piety in her eternal self-sacrifice, looking down from her nest upon the tester. The plain window glass let in the first shades of the morning, unadulterated by gaudy colour.

Somewhere down the nave a door opened.