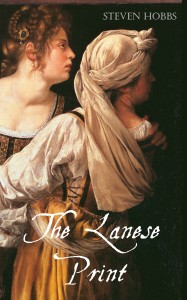 In a desperate flight from Venice across 17th century Europe Simonetta’s insight threatens to destroy her, as her husband’s cruel ambition consumes all in its wake.

As love, vengeance, mistrust and loyalty tragically collide, will the print prove her saviour or her undoing? And as Ignazio’s lethal grip tightens, can it ever prove mightier than the sword?

Where can she turn; who’s left to trust?

The Lanese Print, a murderous tale of retribution and faith, cruelty and compassion.

“As beguiling as the country in which it is set…”

Buy the Kindle edition from Amazon: The Lanese Print

Buy the paperback edition from: Amazon or Createspace

My prime motivation to write The Lanese Print stemmed from a fascination with the iconography of the printed image, and its potential power to seduce the imagination. In particular I wanted to explore the possibilities of the print’s use as a weapon of retribution, as a subtle tool of persuasion and faith. Indeed the ultimate aim was to prove the assertion that the printed image, like the word, is indeed mightier than the sword.

I was also keen to set the story in the context of a cultured and rational society, where reason and responsibility could be put to the test in the face of overarching ambition and cruelty.

Incidentally I’m thrilled with the cover for The Lanese Print, which I think expresses beautifully the vital relationship between the two main protagonists. It features a detail from Artemisia Gentileschi’s painting of Judith and Her Maidservant (courtesy of Getty Images), and was painted in Florence around the years 1613-14. The painting is now in the collection of the Palazzo Pitti in Florence.

Here’s the excellent review from Book Viral (click on their logo below to read it):

And for those who like a taster, here’s the Prologue….

Three men step up from the small boat onto the wooden jetty. His feet are sodden and chilled. They make their way across the uneven boards, each step a slithering. The heavy studded door closes behind them, banishing the canal. He glances back. Sanctum. Into the broad courtyard, into the lantern of pale winter sun, into the core of his cruel authority. He follows them up the external staircase to the arcaded terrace. They turn along the shaded gallery, stone vaulted. Their footsteps echo perceptibly, then die in deference to the approaching pair. She passes him, with her maidservant, her eyes lowered.

Along the corridor, another turn, through a door of fine mahogany, and into the narrow room. “Wait.” He waits. His breath clouds visibly on each exhalation, his feet ache in their numbness. He sits on a low bench of dark wood, burnished by innumerable backsides before him; each shuffling apprehensively, waiting for the summons. The crumbling ochre plasterwork forms a low border to the tapestry before him. He surveys the fine work; his discerning eye interprets the image. Actaeon in his death throws, savaged by his own dogs, Diana with her bow drawn. One breast exposed; her quiver slung nonchalantly; pert, brutal, vengeful.

He resists the temptation to flake-off the plasterwork with his toe. The door opens. “Go.” He steps into the room.

The print is displayed, withdrawn expectantly from its portfolio, exposed to the rigour of his uncompromising eye.

He turns to the other gentleman. “My house looks fine Roberto, don’t you think?”

“None better in Venice.” He lies, there are several. Diplomacy is the better measure with this man, self-preservation the whetstone of the mind.

Ignazio takes a glass and inspects the image assiduously, traces the graven lines, assesses the likely impact. What will it mean to his friends, his enemies? Envy, regard, a jealous commission to their architect? It matters not to him. Palazzo Lanese; a painting next perhaps.

“It will serve. See my man for your purse.” The hand dismisses.

Rizzoli bows “My Lord” and withdraws to the ante-chamber; the door is pushed-to after him, not completely closed. He sits and waits, no sign of his man, poor prospect of the purse on this day; any day. He knows the routine.

The print is forgotten; voices are raised.

“And what of Vermuyden?”

“He’s taken with your strategy.”

“Taken…taken! Will the bastard bite, that’s what I need to know? Will he agree terms?”

“It looks that way.”

“Damn the man! Make him sign.” A fist is hammered down, plate rattles. “I’ve waited too long. I want the arrangement confirmed. Tell me you understand.”

Pale light seeps in from the ante-chamber, illuminating his folly. He strides to the door and looks through into the small room; his gaze betrays contempt, mistrust. A pause; the long stare. Rizzoli’s eyes fix firmly on the tapestry; on Diana’s woven breast; intimidated. He holds his cold fist tightly; waits; does not look up. Water seeps from his boot.

“Well?” The door slams shut. He hears faintly “Not a word to the Council” then “Watch him.”

They release him through a side door onto the narrow calle. His pockets are unburdened by a purse or any other favour. His portfolio is empty. Forlorn hope of reward; of any recompense. Thieving bastard he thinks. He’s muttering to himself as he crosses the bridge, through the covered alleyway and out across the deserted campo towards the church. He’s railing internally; railing at the deaf walls, the impervious sky; levelling his anger at the scavenging pigeons. “Bastard!” This time it escapes with vigour; elicits a concerned glance from a woman draping damp linen from her window. He smiles up at her in shame; crosses his arms across his chest, clutches his shoulders. “This weather.” He stretches his arms wide, craving forgiveness. She turns away, retreats into her room.

The withering damp chills him bone deep as he walks the long walk back to his house. Hands, fingers, face and feet, all are numbed. The unremitting attrition of winter’s embrace drives its cold fingers into his skull. He shakes loose its grip and unlocks the door. On his knees he meticulously stacks shavings, kindling, and wood in the hearth; strikes the tinder and cherishes the risen flame. He takes a moment to offer his palms for comfort, then moves to the table. Taking a scrap of parchment he dips the pen and writes, Vermuyden, blows the ink dry then pushes the note into a drawer.