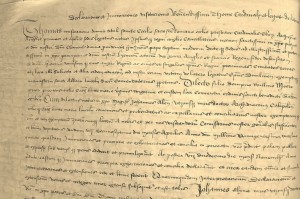 Over the past couple of weeks I’ve been at the cathedral library in Worcester, researching the pre-Reformation visitations to the priory of Worcester, in preparation for my latest blog.

Having been married to a teacher for 30-odd years, the raw anticipation of an impending OFSTED visit was usually an emotionally draining event. So spare a thought for Prior More who saw three major visitations during the latter part of his priority. The findings, and subsequent injunctions issued, may seem harsh; however, it must be said, given the contemporary evidence (and allowing even for the occasional personal axe to grind), he really should have seen it coming!